Over many years, I have faced an almost constant battle with depression.  I have tried numerous types of therapy and none have really worked very well.  Certainly not things like CBT, as my autistic brain struggles with the hypothetical/visualisation element.  But a couple of years ago, I spent a short time with an NHS therapist who focused on some short-term coping strategies and it was the best experience I ever had of therapy.

One of her ideas, which I think is brilliant and has been extremely successful so far, is to create what she calls an “Emergency Box”.  This addresses a specific problem that anyone who has suffered depression will no doubt recognise – knowing the importance of engaging in enjoyable or mood-enhancing activities, pursuing things we love, but lacking the motivation to do it, and being overwhelmed by the stress of choosing an activity, what film to watch, what music to put on… And the subsequent self-loathing that leads to a further deterioration in mood, the whole vicious circle, round and around.

The idea of the Emergency Box is to take away some of that stress and ensure you can do something you truly get pleasure from even when you lack all energy and motivation.  It is a physical box (or I guess it could be a bag, a drawer in your cupboard or whatever) in which you put a small selection of things that you know are pretty much guaranteed to bring you pleasure.  It could be favourite books and films, photos of happy and memorable times, your favourite songs, an activity or game to play, basically whatever you enjoy the most, whatever you would most want to reach for to give you a boost but often struggle to summon up the energy to initiate.  Mine is a physical box – I am fortunate in that my wife enjoys decorating boxes as a hobby so I have one of a perfect size with an elephant – my favourite animal – on it. 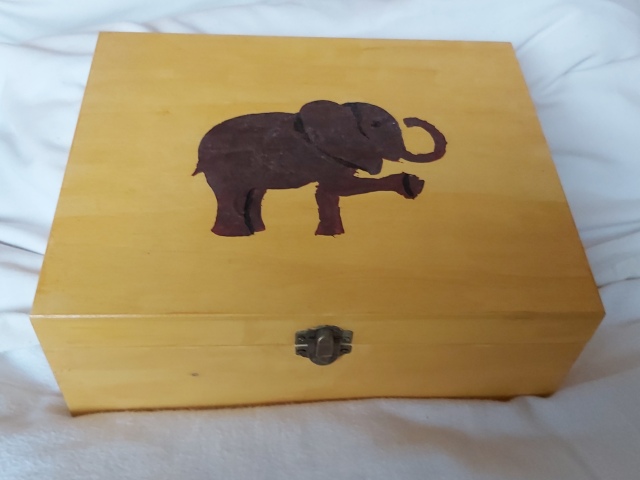 For me, the music was the most important element, and the one I have mainly used.  Music is one of my major pleasures and interests, and not listening to music as much is a sure sign that my depression is getting worse.  But there are many occasions when choosing an artist or album to listen to is simply too much for me, and instead of putting on music I end up wasting my time online or watching some nonsense on TV. My mood suffers and I miss out on one of the most inspiring, positive and uplifting things in my life.  I bought a cheap MP3 player on Amazon for my box, but I also made the same songs into a Spotify playlist, which I have a shortcut to on my phone’s home screen.  The therapist advised that it’s not necessarily for favourite songs – as sometimes they can be ones that make us think or have very deep, introspective feelings.  It should be songs or music that make us smile – with the very best and most positive associations.  In my case, it has a broad range, but there are lots of songs from my youth and my student days, times when anything seemed possible and I didn’t have as many stresses.  The “Emergency Box” playlist is the thing I probably listen to more than anything else now and it means that there is still music in my life even when I am too low to choose it.  Everyone will have their own choices, of course, but here are mine.

What else is in there besides the MP3 player?  Well, books I have read so many times that I can just dip into them when I want to: Last Chance To See by Douglas Adams, Good Omens by Terry Pratchett/Neil Gaiman and Fever Pitch by Nick Hornby.  Photos of my hockey team Nottingham Panthers’ successes, family and friends. Springsteen concert tickets.  A couple of bouncy balls / power balls, which I have loved since I was a kid – I always carry one around in my pocket as a distraction or physical thing I can do if I need to zone out.

When the therapist suggested the idea to me, I was quite sceptical. But I have to say I have come to realise it’s a great idea and I have benefited from it immensely.  Especially the music.  Of course, it’s not a solution for depression but it is certainly a very useful strategy to help get through some of the toughest and darkest days.

This entry was posted in Uncategorized. Bookmark the permalink.